Due to the popularity of NFTs in 2021, many new NFT marketplaces have emerged. NFTs seem to play an important role in the crypto world again in 2022. NFT marketplaces are primarily for art and in-game items, but there are other uses for NFTs as well. These other applications also have their own marketplaces and a bit of blockchain wants to have its own NFT marketplace as well. A rather special NFT marketplace has now been added, namely the Taboo NFT marketplace. Taboo wants to become the Playboy of the blockchain, mainly with nude photos and NFTs, without hard porn. Although this will be offered in the future.

In this blog, we are going to talk about Taboo and the TABOO token. I’m going to explain to you what Taboo exactly is and how it works. I’m also going to take a look behind the scenes at the team on this project. Furthermore, I also take a close look at the TABOO price and also tell you where to buy the TABOO token.

Please note: please note that the text below about ‘Taboo (TABOO)’ as well as the explanation thereof should in no way be taken as advice. The choice for whether and in what way you want to trade (crypto) and which choices you make in terms of investment is up to you and you alone. We are not financial advisors.

Here you can first watch a video explaining Taboo.

One of the benefits of choosing blockchain technology for their platform is the way payments are processed. Credit cards can be expensive and traceable and it often happens that various extra costs are charged on adult sites. This is not the case with blockchain. Transactions are recorded on the blockchain, but are anonymous, because only a wallet address is visible, and there is no name attached to it. A handy advantage for many people, especially men.

Creators of material for the platform also benefit from this, because a profit distribution can easily be programmed in the NFTs that are sold. In addition, creators can also program a resale percentage, so every time their NFT is resold, they get a percentage of the sale price.

Taboo has therefore fully embraced NFTs and Virtual Reality with a selective offering. Their platform will become a cross-chain platform with layer 2 solutions in the future. Although there is currently no information available about which layer 2 will be used. Blockchains they have in mind include Harmony, Fantom and Polygon.

There is already a functioning NFT marketplace, but there are also plans for a merchandise store. Furthermore, there will be another NFT collection of Taboo punks in the future. If the necessary technology is available, individual VR showrooms will also be created. A weekly or monthly radio show is in the pipeline and for dessert, they are going to throw parties in their exclusive Taboo mansion.

How does Taboo work?

Taboo works with four different levels. A minimum amount of TABOO tokens is required for each level to gain entry. However, the first level is free. Taboo also wants to maintain a strict selection process for all models on its platform. This should ensure a selective and exclusive platform, where everyone knows you can find quality.

What are the 4 different levels?

To access the different levels, creators can sell their products individually or through a subscription on 4 different levels. The prices then vary per level. In order to use levels 2 to 4, it is necessary to have TABOO tokens in your wallet. There must also be an internal platform system so that fiat money can be bought directly on the TABOO platform.

Is free. Expect the so-called vanilla material here, so no nudity, but teasers for what to expect on the other levels. Lingerie, cosplay and similar topics can be found here on the marketplace. It also entitles you to participate in free events and access to the Taboo Member’s Forum. You can view or read everything that creators offer at this level. This is the SFW (safe for work) level. A 10% fee is charged for each transaction.

To access this you must either have $1000 in TABOO tokens in your wallet or stake TABOO on the platform for the same amount. Here you can expect completely naked creators, striptease, and everything else that is just not pornography. Now you get access to everything at level 1 plus you can chat with your favorite creators. You get a 10% discount on all merchandise products and the chance to see exclusive products that creators post here. You now pay a 7.5% fee on every transaction. 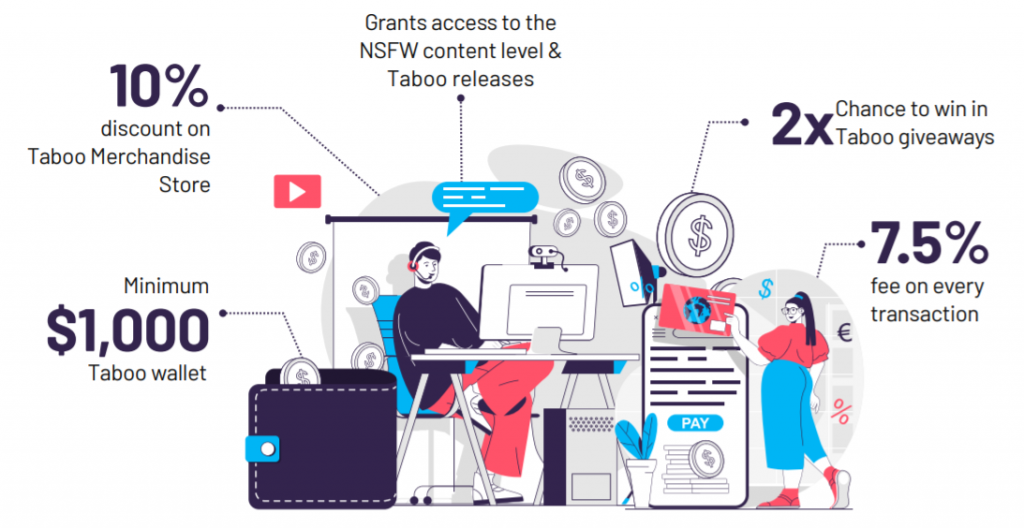 Now you will need to have $5000 in TABOO tokens in your wallet or stake on the platform for the same amount. You are now also directly in the hardcore or XXX part of the platform. The material you will find here will leave little to the imagination and is NSFW (not safe for work). This can be in the form of videos, NFT videos or photos, depending on which product the creator offers. Everything from levels 1 and 2 is accessible, but you also have the option to connect directly with creators via private messages or video. You can also ask for special favors from your favorite creators, albeit at a price. You get 15% off merchandise and transactions now cost 5%. 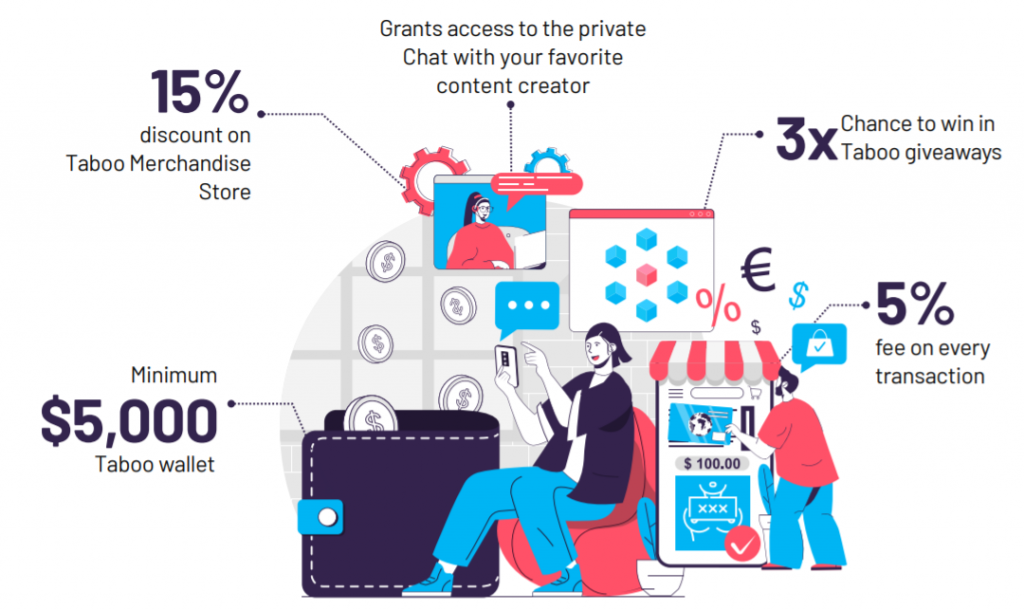 Here you need no less than $10,000 to become a member. In your wallet or by staking on the platform. You get access to everything in level 1-3 and pay a further 2.5% transaction fee. Now, however, access to Taboo Private Events is included, whether online or live. The stunner is an invitation to parties in the Taboo Mansion with the presence of creators. The locations are known, but not yet disclosed. [/caption] 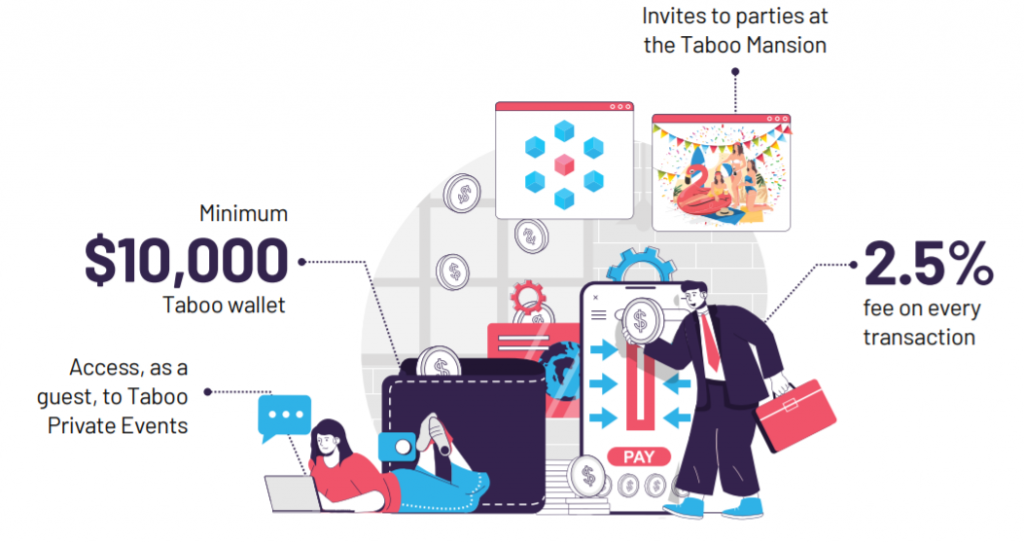 I can still follow and understand levels 1 and 2, but at level, questions arise about who will ever pay for this. You have to dig deep into your pockets to be a member. Furthermore, it is also very questionable where they have those Taboo mansions because no information is given about it, except that the location is known to the team.

There are plans for a second token, namely a management token. You can get this token by staking TABOO or buying it directly on the platform with fiat money. However, it can also be used to tip creators. It can also be used to buy creator products or NFTs. It will first only be used as a means of payment and later as a management token. This will only come after the NFT marketplace V2 is ready. So that could take a while.

This token could also be used on their adult cryptocurrency DEX, which they are planning.

Who is on the team behind Taboo?

There is information about the team on their website and in the whitepaper, but it is quite scarce. For example, no surnames are used and there is no explanation about what experience these people have in the blockchain world or in the adult industry. On the other hand, they have a lot of AMAs on their YouTube channel, including team members and creators. However, this is again anonymous and there is only a photo of the person called Majid, but that does not say much. This is unfortunately a weak point of the project.

Other than Khloe Terae, who is a creator and model, no information can be found about any of the other individuals mentioned.

What is the TABOO token?

The team has allotted itself 18%, which is quite OK and does not immediately indicate a back pull. However, the unlocking will only take place for 6 months and that is a very short period of time. 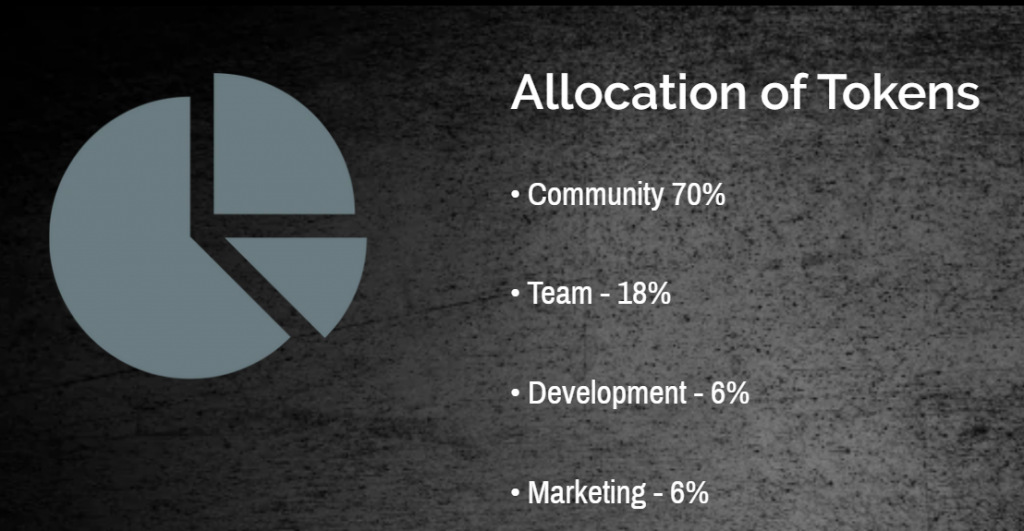 What is the price of the TABOO token?

If you want to invest in the TABOO token, a good start is to know its price. If you are already going to trade, you also want to make a profit. You can make a technical analysis to see what the best buy or sell moment is.

At  CoinMarketCap, it is just outside the top 500 in place 511. It is difficult to estimate whether this coin still has a good prospect. He has reached his ATH relatively quickly and all the coins are already in circulation. The idea of ​​the project is good, but I still have my doubts about levels 3 and 4. There is an air of a scam about this coin, although there are also good things to discover in the project. I think it is wise to be careful when investing in this currency. If you do want to invest in this coin, it is important to do your own research, because I do not give financial advice.

Where can you buy the TABOO token?

The TABOO token is not yet for sale on Bitvavo and  Binance. There is one leading CEX offering this coin and that is Gate.io. Almost all tokens can be found on Gate.io and new tokens are added every week. A very good alternative to Bitvavo if a token is not offered there. There is also a liquidity pool on the PancakeSwap DEX where you can find a TABOO pair.

The following video explains how to buy TABOO token.

What is the best way to store the TABOO token?

You can of course leave your TABOO token on the exchange where you bought the token. However, now you do not have access to your private keys. The private keys of exchange remain in the hands of the exchange itself. There is always the danger of a hacked exchange and then you have a chance that you will lose your crypto. These wallets on an exchange are also called hot wallets.

At first glance, the Taboo project seems like a fun project. In October and November of 2021, the token received a good boost leading to a preliminary ATH. However, there are also a few striking things about the project, which I don’t think are 100% comfortable.

For example, levels 3 and 4 of ‘membership’ seem a bit too ambitious, but that’s my opinion and there might be people out there willing to pay for this. There is also no information to be found about the team, which is, unfortunately, a bit vague. The fact that the tokens for the team are also released after 6 months is very fast.

On the plus side, they have a functioning NFT marketplace and also a blog with regular updates. Their YouTube channel is also regularly updated with new videos, with AMAs. It is a doubter, this project. Perhaps it is better to first look out of the woods before investing in Taboo. However, if you want to do that and buy the TABOO token, do your own research first. I am not a financial advisor.

If you have any questions about the Taboo token, let us know on our Cryptokopen Facebook group. You can also follow us on  Twitter. See you there!