StrongBlock (STRONG) is an ERC20 token and a multi-chain Nodes-as-a-Service (NaaS) platform. In this way and structure, it rewards nodes because they contribute to a more secure blockchain. Although we may have all heard about blockchain and crypto, blockchain technology remains rather abstract. The protocol wants to make this technology easy and accessible for everyone in order to offer everyone the opportunity to create their own blockchain nodes. All this in a simple and user-friendly way.

A blockchain has a decentralized structure that is made possible by the use of miners and nodes. Miners register transactions and data and synchronize them with other miners in the network. This is done on the basis of computer-controlled software that requires a lot of computing power. But because of these miners, the network remains decentralized and therefore also safe. The miner also receives a reward for this. A node, on the other hand, is responsible for keeping a complete copy of all blockchain transactions. This does not require abnormal computing power, which does not make these nodes harmful to the environment.

This data is then shared with, among other things, decentralized applications (dApps) in order to work efficiently and quickly. Until now, we saw that nodes were not compensated. The more nodes there are in the network, the more decentralized the blockchain is. Thanks to STRONG, you can now help to keep your favorite blockchain decentralized and secure, while also receiving rewards.

What is a node?

In the blockchain, we use miners and nodes. A node is necessary for the blockchain to work. This is software that connects your node with other nodes to create a solid network. All data is stored, received and processed on these nodes. It is therefore essential to use nodes to ensure the security and integrity of a blockchain.

How does STRONG work?

STRONG is a zero-chain Nodes-as-a-Service platform (NaaS) and wants to offer everyone the opportunity to create a node. It is not a minting node, but these nodes analyze the transactions on the mainnet and make sure that they store a copy of the blockchain. So they receive rewards for this. By stimulating this process, more nodes will be created in the network, making it more decentralized and more secure. Nodes in the network thus validate transactions across the network, in this case, Ethereum’s network. Many protocols are ERC20 tokens and therefore fall into this network. Previously, these were not compensated, but thanks to the STRONG protocol, nodes are rewarded based on the native token $STRONG.

Running a node used to be a difficult process. For this, you needed sufficient technical knowledge. Think of coding complex programming language, but also running your own server that can reliably output all information from these nodes. Thanks to STRONG’s Node-as-a-Service, all these processes are automated by StrongBlock itself, allowing anyone to set up a node. With a few simple clicks, you can create your own node. Thanks to a monthly contribution, StrongBlock takes care of the technical realization of the node, while you benefit from the advantages!

Thanks to the user-friendly interface, you can quickly and easily connect to numerous public blockchains. Users can thus access different blockchain protocols with just one integration. 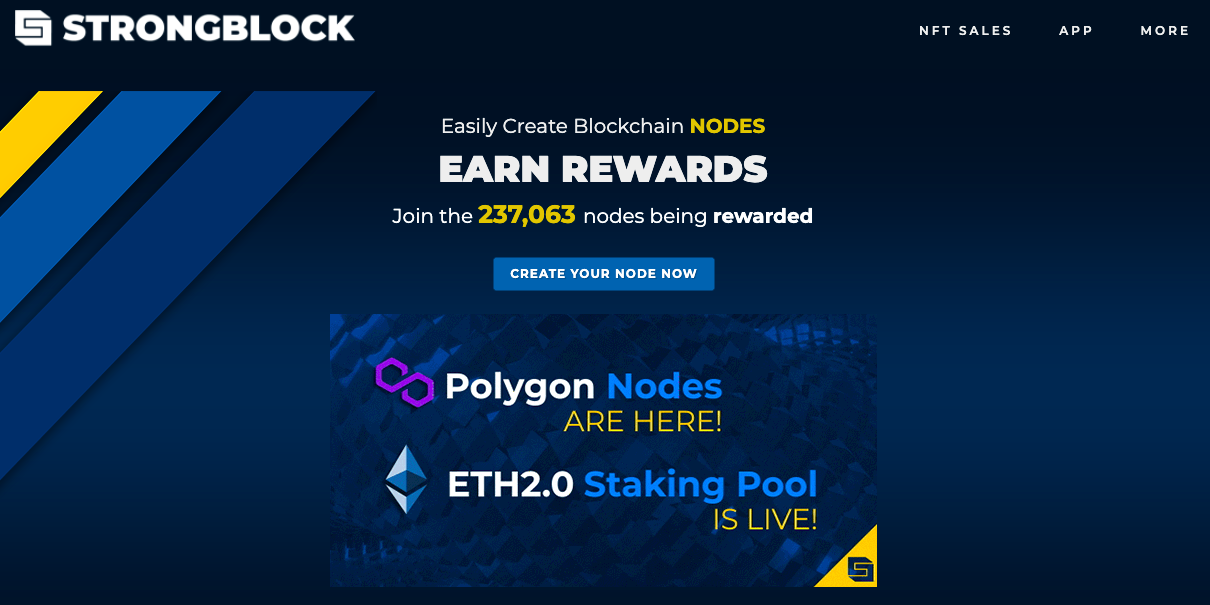 The protocol is designed in such a way that you as a node can earn a nice passive income every month. This way you will be rewarded for your services rendered as a node. Rewards you will receive in STRONG token, which is the governance and native token of the protocol. How much this reward depends on several factors. Think of the number of nodes, but also the current price of $STRONG as well as how many NFTs you own.

StrongBlock NiftyFi is the Ethereum ERC1155 token. These are NFTs with a specific DeFi target. In the future, more and more Ethereum sidechains and Ethereum layer 2 chains will be used for StrongBlock’s activities. In particular to keep the gas fees of these NFTs low. Each non-fungible token gives you access to the protocol, as it continues to expand into multiple blockchains. Currently, there are a total of 5,189 NFTs, which are categorized between Bronze, Silver, Gold and Platinum.

Each NFT can be staked several times at different nodes, depending on the category:

StrongBlock officially announced an expansion to Polygon’s network in November 2021. Those who have an NFT in their wallet can therefore also run a node here. This is a kind of early-bird action where you can set up your node early. However, Polygon will also make nodes possible for everyone, even if you do not own an NFT. And not only will Polygon be part of this revolution, but the team has also confirmed its partnership with Fantom (FTM).

However, up to now you also need 10 STRONG tokens to run a node. There are rumors that this number will decrease in the future so that anyone can invest in a STRONG node. 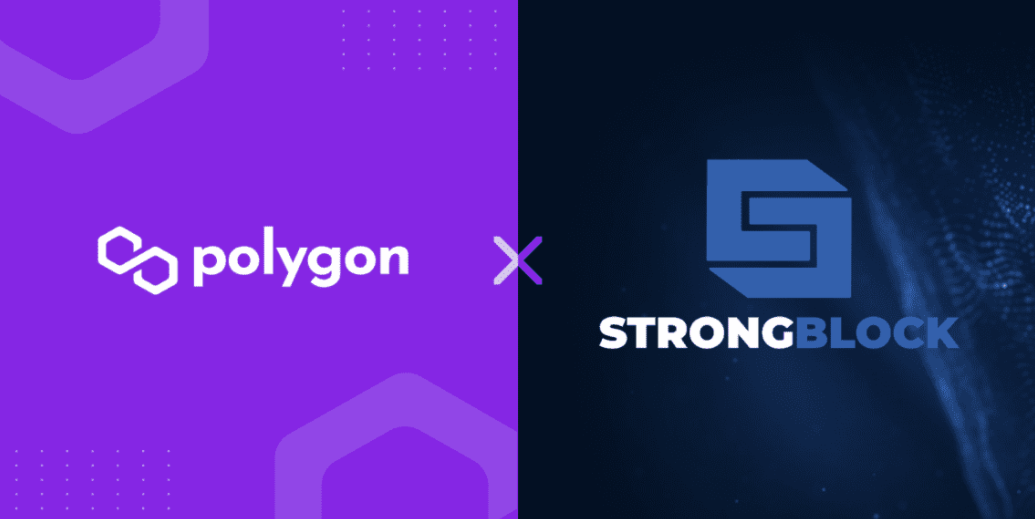 $STRONG is an ERC20 token with a governance function. The token’s function is to reward nodes in the network. At launch, there was a total supply of 10,000,000 tokens. This has been reduced and burned to the current supply of 528 886 tokens. Tokens are burned to regulate the price of the anti-inflation protocol.

These are distributed among the community, the shareholders and the team:

StrongBlock (STRONG) owes its popularity to attractive passive income generated by these nodes. Currently, each node gets a reward of 0.1 STRONG per day. This means, at the current exchange rate, that you will receive just $65 a day for your services rendered as a node. If the price increases, you will of course earn more in passive income.

The only requirement for running a node is that you must currently own a minimum of 10 $STRONG tokens to create a node. This is a significant investment for the average man. This means that at the time of writing you need to invest $6,500. This with the risk that your investment may become worth less due to a volatile price.

Because you get 0.1 STRONG every day, you earn a full token in 10 days. So you have earned back your entire investment after 100 days. But knowing that you can create a new node per 10 tokens, you could also use these rewards to set up more and more nodes to maximize your passive income.

Running a node is not free, so you pay a maintenance fee of $ 14.95 every month. If you do not pay this amount within 30 days, your node will be destroyed via a smart contract. This means that you have lost your entire investment and tokens.

At the moment the threshold is still too high and the protocol only recognizes wealthy investors. To avoid this, the protocol is speculating to soon allow for fractional investments as well. This means that you don’t have to meet the full 10 tokens to create a node, but you can also invest in part of it. Your rewards will depend on your position size.

You can also stake your STRONG token in the Ethereum 2.0 staking pool. So you will receive Ethereum as a reward here. It is important to know that you can only claim your rewards from the moment the Ethereum 2.0 main net goes live. To promote this strike anyway, they have attractive APYs here up to almost 16%.

If you are willing to take the extra risk and add liquidity to the STRONG-ETH pool, you will receive no less than 86%. You can claim these rewards after each new block that is added. Keep in mind the possibility of impermanent loss. 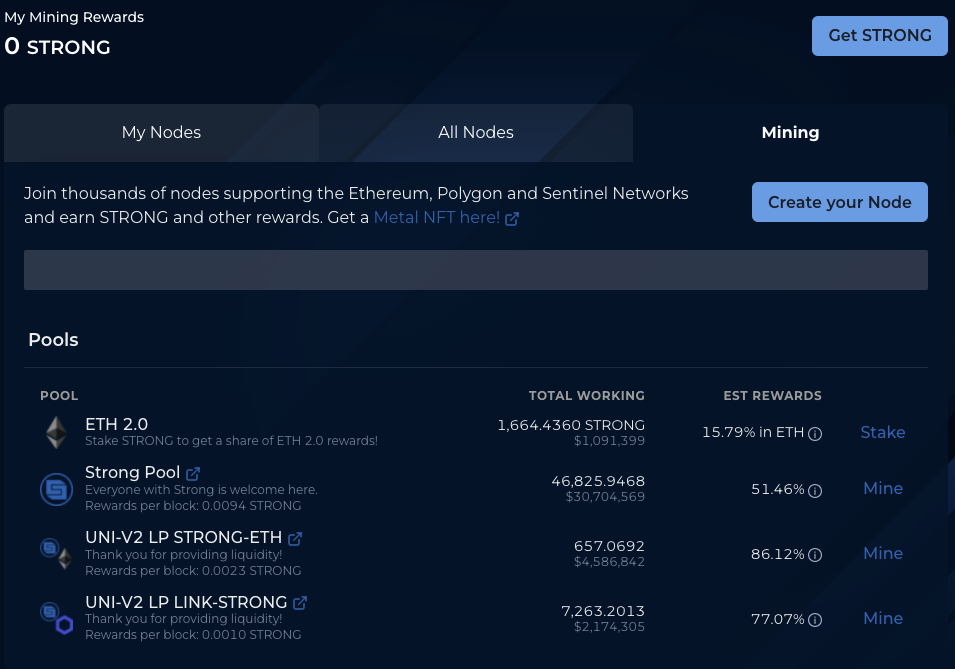 Strong’s partners are impressive. At the time of writing, they have 6 major partners including Polygon, Fantom, DAO Maker and Sentinel. The latter is a blockchain infrastructure for the web 3.0 . This ecosystem is a network of autonomous decentralized VPN applications that makes it possible to use the internet completely privately and decentrally.

David Moss is the founder and CEO of StrongBlock. He studied general science at Portland State University but quickly developed into a specialist in the world of technology. Previously, he was CTO at a company that developed applications for parents to regulate the smartphone use of children. In 2017, he started his career in blockchain as Senior Vice President at Block.one. His responsibility was to roll out a decentralized blockchain system and then also implement it in external companies. 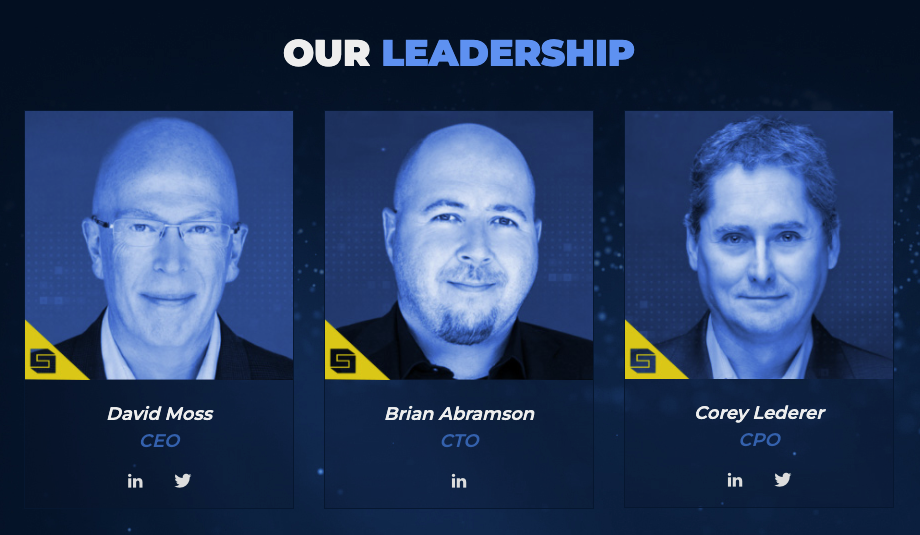 Brain Abramson has been Chief Technology Officer (CTO) since August 2018 and is no stranger to David Moss. He worked under his supervision at Block.one, where he was responsible for realizing the test net and the associated security and the like. Together they decided to focus on StrongBlock in mid-2018.

Corey Lederer has been Chief Product Officer (CPO) since July 2018. Corey is responsible for a rock-solid strategy in which they have a long-term vision and with which they want to further expand StrongBlock. In addition, he is also responsible for the integration of the applications in various companies that use blockchain technology. Until 2017, he was a Senior Manager at Nike for 13 years where he was responsible for the technological developments of Nike Global. With a degree in computer science, he combines his knowledge and experience to further put StrongBlock on the map.

With the further development of blockchain technology, it is necessary that we can guarantee a decentralized character. Nodes are an indispensable part of this technology, but what if there are not enough nodes? Then the blockchain is at risk. By adding more independent nodes to the network, we increase the security and integrity of the network.

A large part of the protocols are ERC20 tokens and thus operable in the Ethereum network. This means that every minute a huge number of transactions take place that have to be processed. Thanks to StrongBlock, everyone can now set up a node to contribute to this and also earn an attractive passive income. Thanks to the extension of Polygon, you can now set up nodes in different networks, thanks to the multi-chain Nodes-as-a-Service platform.

There is a need for interoperability and thanks to this multi-chain platform, anyone can run a node on different blockchains via STRONG. The more networks added to this, the more interesting it is to run a node on this all-in-one platform. If this happens, it will also affect the price. Consider, for example, what would happen if the Binance Smart Chain (BSC) was also added as a partner.

Please note that the rewards are subject to the current price and can therefore be worth more, but also less at any time. Therefore, always do your research well and determine for yourself how much risk you want to take.