In this blog, We are going to talk about Sologenic and its various products. I’m going to explain to you exactly what Sologenic is and how it works. I’m also going to take a behind-the-scenes look at the team on this project and take a closer look at the SOLO token along with the SOLO price. Furthermore, I will also tell you where to buy the SOLO token.

Please note: please note that the text below about ‘Slogenic (SOLO)’ as well as the explanation thereof should in no way be construed as advice. The choice for whether and in what way you want to trade (crypto) and which choices you make in terms of investment is up to you and you alone. We are not financial advisors.

Here you can first watch a video of how the Sologenic DEX works.

Sologenic runs on the XRP Ledger or ledger, which is really nothing more than a public blockchain. They offer the tokenization of ETFs, derivatives, fiat and stocks.An ETF is an exchange-traded fund, which is a type of security that tracks an index, sector, commodity, or another asset. It can be traded on a traditional exchange, just like common stock. Derivatives are financial contracts concluded between two or more parties. The value of a derivative is derived from an underlying asset or group of assets. In any case, these will be tokenized and can now be traded on a crypto exchange. More on this later.

Tokenizing means converting something of value into a digital token that can be used on a blockchain. This can take place with both tangible and intangible assets. Sologenic uses only tangible assets for their purposes.

Its mission is to become the most influential blockchain-based company in the world. They want to modernize the traditional functions of financial markets. They will do this by enabling cryptocurrencies to be used in every way imaginable. By enabling the tokenization of products, they want to contribute to the mass adoption of cryptocurrencies. That is their view. So they are quite ambitious and have big plans.

Ultimately, it is possible to tokenize over 40,000 traditional assets such as stocks, commodities or ETFs through Sologenic. Use can be made of 30 worldwide exchanges. The XRP blockchain is therefore the most modern and advanced blockchain that can help them in these plans. And you guessed it, that is indeed the blockchain of the XRP token or ‘Ripple’. Although they are two different units, they are also related again.

What are Sologenic’s core values?

They do have a few honorable core values, though.

How does Sologenic work?

Sologenic has a few basic business ideas that are important.

This immediately lays the foundation for their entire project. The idea behind it is to apply blockchain features and benefits to existing traditional financial instruments. For example, the Sologenic ecosystem has several components to achieve this. There is a blockchain module (XRP Ledger), an order processing module, a tokenization module and a decentralized exchange (DEX) module. These components are housed in two systems, the Asset Tokenization Platform (ATP) and a Decentralized Exchange (DEX).

The architecture of the ecosystem then has five components. This makes the on-demand tokenization process for non-blockchain-based assets easy.  They can then be traded against cryptocurrency. These components are the Sologenic Trading Panel, the Brokerage Gateway, the XRPL Native DEX, the XRP Ledger, and the Open SDK suite.

This can be seen in the following image. 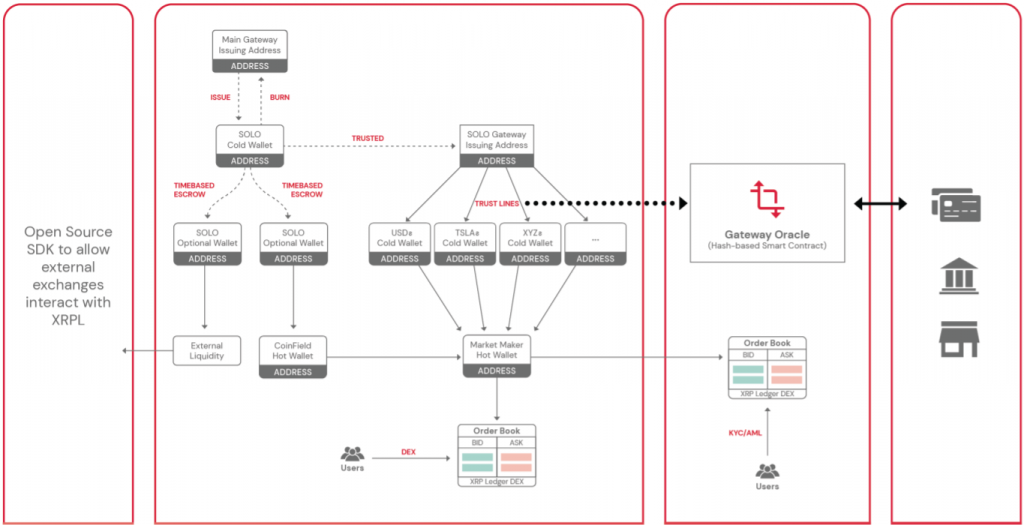 Together, these components allow a user to buy traditional financial assets, such as a stock, with fiat. After that, these assets can be tokenized, and the tokenized representation of the assets is put on a private wallet under your own management. After this, these tokenized assets can be traded on a DEX controlled by the blockchain. It also takes into account that all legal regional regulations surrounding the asset are met. All real-world rules for the assets are followed and applied to the tokenized assets. For example, think of a dividend that is paid, the ecosystem follows this and the dividend is also paid to the owners of the assets.

All tokenized assets are stablecoins by nature and pegged to the real value of this non-blockchain-based asset. They are only redeemable through the Sologenic platform or DEX. They have and keep this value because the Sologenic Gateway always cashes in at current market prices. The Gateway also always follows the guidelines and rules of external markets, so that transactions always take place without devaluation or inflation.

This can all be seen in the following image, showing the Asset Tokenization Platform (ATP) and the Decentralized Exchange (DEX).

A Saxo bank API is used for this. Each order executed by this Saxo API has a unique transaction ID. This is stored in the Sologenic ecosystem and can be accessed at any time.

Sologenic also has a tokenization simulator that explains and lets you try out how the tokenization process works on the DEX. The following video gives a clear explanation of this.

The DEX is also available on your mobile as an Android or iOS app and is supported in six different languages. The wallets on this DEX are managed by the users. The transaction costs are very low and start at $0.000005. 1500 transactions per second can be executed. That is almost as fast as a CEX and there are also market orders, limit orders and stop-limit orders. There are four wallets accepted by the DEX, the SOLO Wallet, the Ledger Device, D’Cent and the XUMM App.

The SOLO wallet is Sologenic’s proprietary wallet and as a mobile app, it is a combined DEX and wallet. It also has all the functions of a wallet and a DEX, such as storing tokens, being able to follow markets live, trading and withdrawing or depositing assets.

SOONEX has been specially developed for financial institutions, brokers or brokers, worldwide stock exchanges and investment firms. With blockchain technology, new services are offered or existing services are improved.It is a trading suite designed to provide investors and investors access to decentralized markets. The same technical possibilities, effectiveness and safety are offered here as in TradFi. However, this product is not accessible to investors, only to financial institutions. They must then plan a demo with the team if they are interested in SOONEX.

The following image shows the possibilities of SOLONES. 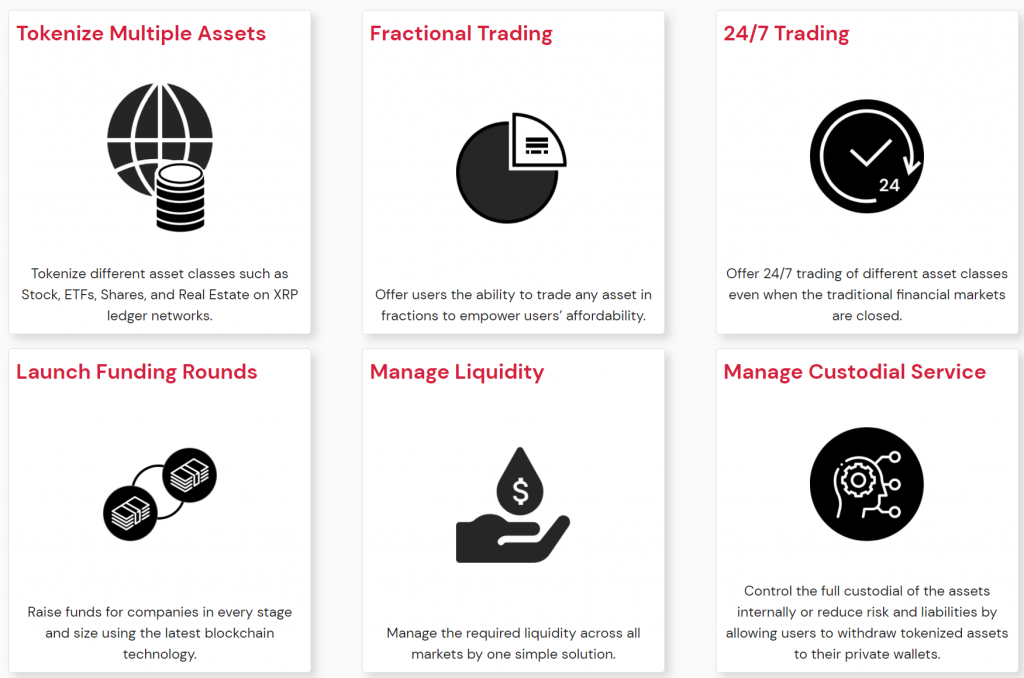 Who is on the team behind Sologenic?

The Sologenic team consists of more than 30 people and includes specialists and experts for software development, research &amp; † develop legal advice or relationships with banks. The core of the team comes from Estonia. I’m going to introduce you to the key people on the team.

What is the SOLO token?

A tokenized asset gets an inverted ‘S’ appended ‘Ƨ’, as in TSLAƧ, AAPLƧ and so on. 100% of all transaction costs are burned. This deflationary mechanism creates scarcity and ultimately a higher price for the token. In the long run, this means that the SOLO token will not disappear completely due to the high value of the token and the smaller supply.

The team has allocated itself no less than 35%, which is quite a lot. However, the spend on the team is spread over 36 months with an unlocking mechanism.

This can be seen in the following image.

The unlocking of the token is done in the following way.

What is the price of the SOLO token?

If you want to invest in the SOLO token, a good start is to know its price. If you are already going to trade, you also want to make a profit. You can make a technical analysis to see what the best buy or sell moment is.

At  CoinMarketCap  , it is just between the top 200 and 300 in place 255. I think this coin has a good prospect, especially if Bitcoin continues to rise in 2021. I think it could experience a good price development. If you want to invest in this coin, it is important to do your own research.

Where can you buy the SOLO token?

The SOLO token is not yet for sale on Bitvavo and  Binance . At the time of writing, no leading CEX has this coin on offer. It can be found on ProBit Global, Bitrue, BitForec, CoinField, HotBit and CoinTiger.

What is the best way to store the SOLO token?

You have several options to save this token. The safest way is to store them on a hard wallet, also known as a cold wallet. With a hard wallet, such as the Ledger X or S, you are protected against internet hacks.

You can of course leave your SOLO token on the exchange where you bought the token. However, now you do not have access to your private keys. The private keys of exchange remain in the hands of the exchange itself. There is always the danger of a hacked exchange and then you have a chance that you will lose your crypto. These wallets on an exchange are also called hot wallets.

As a third option, you can also use an online wallet such as the SOLO Wallet, D’Cent and the XUMM App. Here is also another chance of an internet hack, but it is theoretically smaller than a hack on a stock exchange.

Is there competition for Sologenic?

There is quite a bit of competition in the market for Sologenic. Several other projects have a similar idea. Synthetix running on Ethereum, Polkadot’s dTrade and Solean running on Solana.

Sologenic will have a major token airdrop for XRP and/or SOLO token holders at the end of 2021. Not every exchange participates in this, but many crypto exchanges do. This airdrop is also accessible to people who have XRP or SOLO in their own wallets. One criticism of this airdrop is that the token probably didn’t sell as well as expected. That’s why there is the airdrop.

Proponents of Sologenic see it as a challenge to get the community more involved in launching an NFT marketplace on their DEX. In any case, 200 million will be released representing a value of approximately $1 billion. This makes it one of the largest airdrops ever.

Anyway, Sologenic will definitely have to step up to the competition to be able to leave behind.

Sologenic is a project that has a future. With their idea of ​​offering traditional financial resources through tokenization in crypto markets, they have built an interesting ecosystem. This can be interesting for both private investors and institutional investors. Diversifying your portfolio is important, and Sologenic provides this option. It is also a challenging and interesting way to bring TradFi and crypto together.

However, there is also a lot of competition in this market segment, and a popular platform such as Synthetix is ​​a formidable rival. Yet Sologenic also has a few plus points and they are not just beaten or beaten out! It is possible to tokenize as many as 40,000 different assets on demand.

This is a project worth keeping an eye on. If Sologenic comes out victorious over all the competition, that will also be good for the price of the token. That is why it is a good idea to first wait and see how the project develops. If you do want to invest in SOLO, do your own research first, because I am not a financial advisor.