NFTs performed well throughout 2021. However, towards the end of 2021, they were given an extra boost by the popularity of the metaverse. The prices of NFT and metaverse projects continue to rise. The Sandbox , Decentraland and several other projects are going like a train. These are projects that are already live and that you can participate in. What is interesting to see are the projects that are still in development and will not go live or come up with beta versions until 2022. They are now raising millions of dollars for their project to further develop it. Star Atlas is an example of that. However, those who have been around for longer and only plan to go live in 2022 is Illuvium.

You’ve probably already figured it out, in this blog I’m going to talk about Illuvium and the ILV token by giving several substantiated reasons. I’m going to explain to you what exactly Illuvium is and how it works. I’m also going to take a behind-the-scenes look at the team on this project and take a closer look at the ILV course. I will also tell you where you can buy the ILV token.

Please note: keep in mind that the text below about ‘Illuvium (ILV)’, as well as the explanation thereof, should in no way be construed as advice. The choice for whether and in what way you want to trade (crypto) and which choices you make in terms of investment is up to you and you alone. We are not financial advisors.

Here you can first watch a video showing what to expect in the Illuvium game. The visuals are fantastic and promise a lot regarding the quality of this game. No wonder they manage to raise so much money.

Illuvium is a role playing game (RPG) built on the Ethereum network. However, it runs on a Layer 2 chain, the same Immutable X that Gods Unchained also runs on. This means no gas costs and insanely fast transactions.It is a kind of open world game, which means that you are not inside a world in the game, but can explore different areas or worlds. Your journey will take you through a vast and varied landscape in a search for a species of god-like animals called Illuvials. You hunt them and if you have caught them you must first kill them healthy again. Then they become your faithful helpers you need in the various battles that exist in the game.

This game is also referred to as the first AAA game on the blockchain. This game has been under construction since 2020. It has everything to offer both casual gamers and ‘die hard DeFi ‘ fanatics through various collect and trade functions. The game itself is a mix between the aforementioned open world game and a PVP (person vs person) game. You can venture out to explore the Illuvium game world or expand your team with powerful Illuvials. By participating in the game, you can also earn the ILV Token. The P2E (play-to-earn) premise is of course also built into this game.

There are over 100 of these Illuvials in the game. Each animal has its own affinities, classes and skills. The idea is to catch them, but you can also merge them or upgrade them.

Below in the next video, you can see the trait of a Turtle Omega.

How does Illuvium work?

The game is built on the Unreal Engine.4.26. Everything is coded in the simulation mode of C++. These ensure that everything that happens in the game is executed in less than a few milliseconds. Star Atlas already works with the Unreal Engine 5. The rendering and simulation of Illuvium are deterministic. This means that the server can easily store all input values ​​because they are very small. This makes it possible to watch every battle fought and everything that happens in the game can be saved. The game looks more like a video game because of the fantastic visuals.

You can participate by downloading a desktop app. In addition, various DeFi apps are built into the game, such as a DEX and yield farming.

The point now is for you to go out and hunt Illuvials, battle them and, if you beat them, restore them to health. These Illuvials are, of course, in the form of NFTs.You can also start a battle with other gamers. There are daily challenges and quests. The Illuvials you control have different properties. This makes them different in rarity, usefulness and how popular they are. For example, there are several

These two are the primary attributes an Illuvial has, but they also have other attributes that can be important in combat.There are, among other things, attack power and speed, but also cruelty plays a role. With each victory they become stronger and they can be further strengthened by in-game items or by connecting two affinities.

Below is an example of a world in the game. 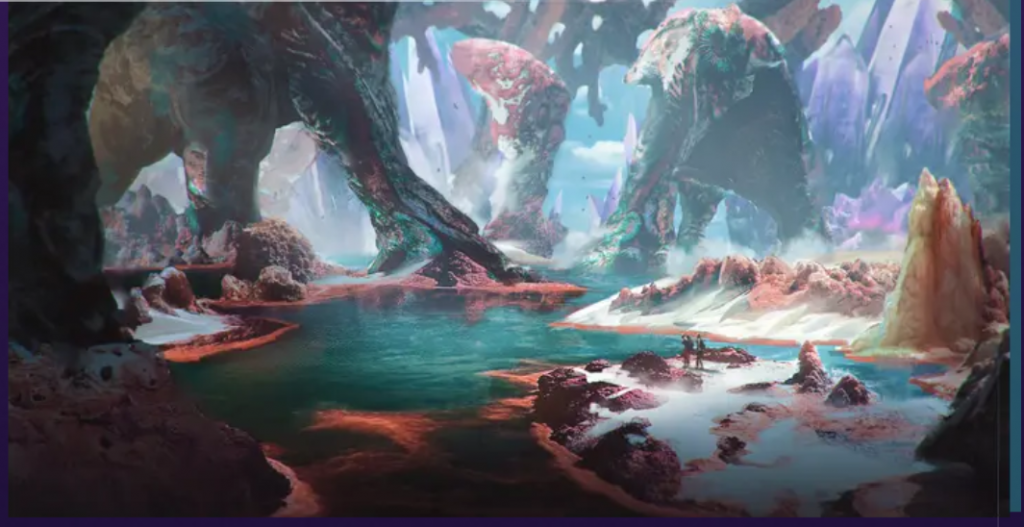 Another way to make Illuvials stronger is to merge two Illuvials. The Illuvial NFTs come in normal, holographic and dark holographic variants. Each successive variant is rarer. This way you get great 3D figures that walk around in the game. The Illuvials are also spread all over the game world, so it is also important to really look for them. New series of Illuvials will also be added all the time, which will make the first series rare.For example, by merging there will be scarcity, but the demand for the first series will always remain. The value of this first series of Illuvial NFTs will therefore also increase in the longer term.

Illuvials are stronger when they can fight in a team. They form a symbiotic relationship with each other, based on class and affinity. This is then called ‘Synergies’. So teamwork is important, it can help Illuvials get stronger and they go to higher levels to grow and develop their strength.

There are a few more special features that make Illuvium unique. Here is a list of the apps and the like that help with this.

Integration with Layer 2 on Illuvium

Illuvium is built on Immutable X (IMX), a layer 2 solution designed to scale applications for NFT functionalities. Immutable X ensures fast transactions and without gas costs. This is important for minting NFTs. You are of course also the owner of the NFTs that you mint or buy until you sell them.

The game has its own built-in decentralized exchange (DEX). All Illuvium NFTs can be traded here. With every trade, 5% goes into the ILV stake pool.

Of the maximum stock of 10 million ILV, 30% or 3 million is reserved for the yield farming program. These are paid to liquidity providers spread over 3 years.

The main parts of the game. This allows you to capture the Illuvials if you beat them, and bind them to you. These shards again come in different layers or levels. The higher the level, the easier it is to capture rare Illuvials with a shard. Strong shards can be found during gameplay, they are hidden in the ground, or you can buy them on the IlluviDEX.

There are many other apps that support the game, such as different battle arenas, weapons or equipment.

Because it is so beautiful, another video with game impressions.

Who is on the team behind Illuvium?

The team behind this game consists of 75 people. The founders are the Australian Warwick brothers , who also have another brother, Kain, who is known for the Synthetix DeFi platform.

This list goes on for a while, with 75 people working on the project. There are also many partners who have already started working with Illuvium. Among others , Yield Guild Games , Bitcoin .com, Immutable, Lotus Capital, Chainlink and several others. This also gives confidence to and in the project.

What is the ILV token?

The token is used for management and staking. There is also a sILV token which is a synthetic token and can be used right away to purchase in-game items or make other payments. This token cannot be traded on an exchange.

Below you can see the distribution of the ILV token.

It is striking again that the team has a relatively small share. This is always a good sign, and shows that they are not running away with the money raised. Especially if the money is also unlocked in the longer term, as can be seen in the following image.

What is the price of the ILV token?

If you want to invest in the ILV token, a good start is to know what the price is. If you are already going to trade, you also want to make a profit. You can make a technical analysis to see what the best buy or sell moment is.

At  CoinMarketCap  , it is just outside the top 200 in place 222. This coin has a good prospect in my opinion, it is one of the biggest risers of all metaverse and gaming cryptocurrencies.I think he could have a good price development. Especially when you consider that the game has yet to go live. I do not give financial advice, so if you want to invest in this coin it is important to do your own research.

Where can you buy the ILV token?

Unfortunately, the ILV token is not yet for sale on Bitvavo  , but it is on  Binance . Most leading CEXs also offer this coin, such as Gate.io and KuCoin . There is also a liquidity pool on the SushiSwap  DEX where you can find an ILV pair.

What is the best way to store the ILV token?

If you want to go for the safest storage option, it is best to choose a hardware wallet . As the name suggests, this is a wallet in the form of a USB stick. You can therefore completely disconnect this wallet from the internet. The moment you have not linked the wallet to a computer, it is impossible for hackers to get into the wallet. Of course you still have to store the wallet in a safe way. The most popular hardware wallets are from Ledger, the X or S version or from Trezor.

You can of course leave your ILV token on the exchange where you bought the token. However, now you do not have access to your private keys. The private keys of an exchange remain in the hands of the exchange itself. The danger of a hacked exchange is always there and then you have a chance that you will lose your coins. These wallets on an exchange are also called hot wallets .

As a third option, it is better to have an online wallet such as MetaMask or a similar wallet. Now you are in possession of the private keys and it is already a lot more difficult for a hacker to get to your coins. However, if you manage to lose your private keys, you will no longer have access to your own coins. You can no longer access your wallet. For example, if your computer crashes. These private keys are therefore important and you should keep them well, preferably in different, safe places.

Illuvium is the first AAA game built on Ethereum. As you can see from the promo videos, the game looks spectacular, with great 3D visuals. The attention they have already managed to create with this project is quite large. This is truly a game and project to keep an eye on. In addition to the desktop version, a mobile version is also being worked on.

When the game goes live, sometime in early 2022, the price of the ILV token may receive a new positive impulse. However, if you want to invest in this coin, do your own research first, we are not financial advisors.