Unfortunately, cyber security or safety leaves something to be desired. Certainly, in the digital crypto world, there are regular reports that another centralized (CEX) or decentralized (DEX) exchange has been hacked somewhere. Unfortunately, especially with DEXs in the DeFi corner, there are often serious blows, because that’s where most hacks take place. To bring crypto to the general public, there will still have to be trusted among the general public, so the security of exchanges and wallets is and remains important. Hapi has devised a solution for this and offers security infrastructure for a CEX, but especially for a DEX.

Please note: please note that the text below about ‘Hapi (HAPI)’ as well as the explanation of this should in no way be construed as advice. The choice for whether and in what way you want to trade (crypto) and which choices you make in terms of investment is up to you and you alone. We are not financial advisors.

Here you can first watch a video showing how Hapi works.

Hapi provides a secure infrastructure for DeFi and cryptocurrency projects. It is a cybersecurity protocol with trustless oracles that should deter hackers from carrying out attacks. It was developed by the Hacken Foundation , a cybersecurity consultancy from Ukraine. The founder goes through the loan under the pseudonym of Dona Mara.

The protocol has been devised to give security to both DEXs, CEXs and indeed the crypto traders. The protocol is not capable of freezing funds or tokens. What the protocol can do is, for example, warn a CEX if an amount of stolen crypto fund is deposited on the CEX. It can identify suspicious wallet addresses and not accept suspicious transactions if there is the possibility of crypto money laundering. Especially for merchants, there is a decentralized database with information about security auditions of smart contracts on CEXs and DEXs. The protocol can check whether such an audition has taken place on a smart contract† In the absence of an audition, the exchange has the option to inform the trader of any increased risks. The exchange may also set a limit on the amount of a trade or even restrict trading with high-risk tokens.

Hapi has a database of all hacks in the crypto world and registers all compromised addresses. This information is required as a trustless oracle to all DEXs and CEXs. This means that a stock exchange can immediately block all malicious transactions. Now the hacker can no longer exchange his cryptocurrency for fiat money.

Crypto hacks started way back in 2012, and the team at this protocol now wants to try and put an end to it. Or at least make it a lot harder. 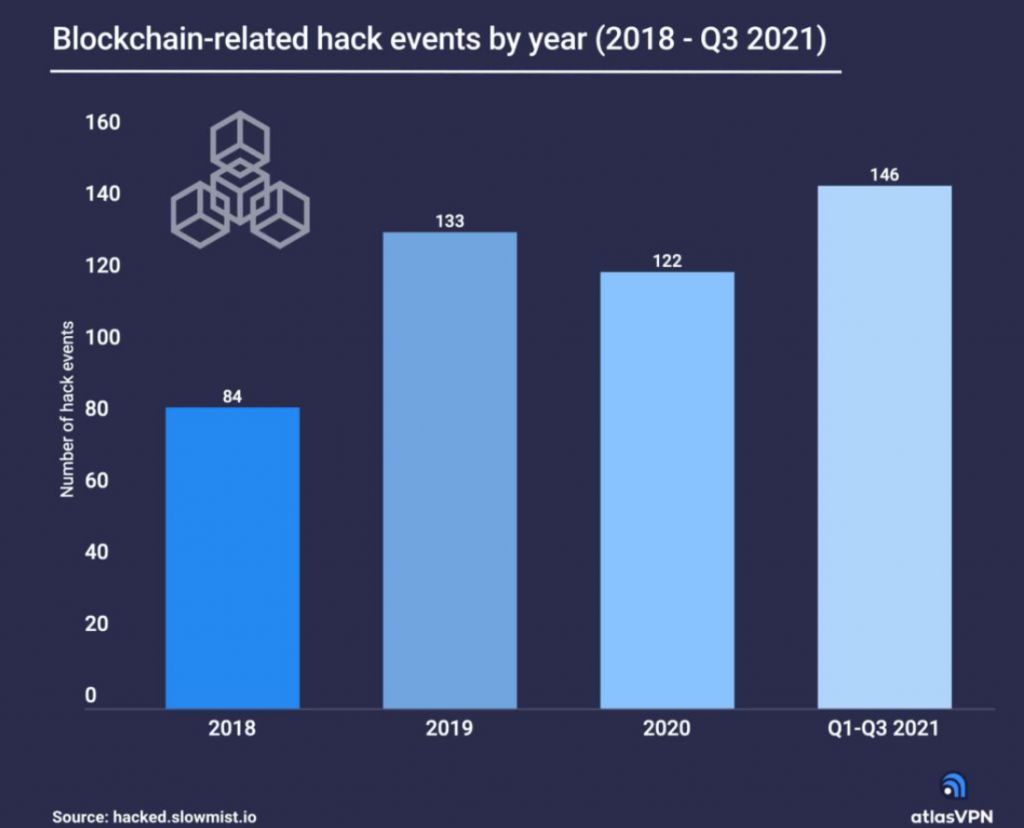 How does Hapi work?

Hapi is a set of smart contracts that can be embedded in DeFi products. This ensures better security. Hapi approaches it very differently from the Lossless Protocol, which we just wrote an article about. At Lossless, developers of cryptocurrencies can put a code in their tokens or coins. This allows the tokens or coins to be traced after a hack. Hapi works with data files that are passed on to centralized or decentralized exchanges after a hack. With these files, the exchange can then keep an eye on suspicious transactions, thus denying a hacker the opportunity to exchange his crypto.

What is the Hapi MVP?

Hapi has released an MVP (Minimum Viable Product) and this is an early version of their product with just enough functionality. Early users can now provide feedback to Hapi so that the product can be improved. By releasing an MVP, developers avoid a lot of unnecessary work. So they continue to work towards the ultimate goal, which is to create a decentralized security oracle.

This MVP’s task is to prevent illegally obtained money, in this case stolen money, from entering off-ramp destinations (converting your crypto into fiat money). Each address is analyzed, cataloged and classified into different levels of possible fraud. This is also known as the ‘binary risk categorization and this is a technology that scores different risks. The potential fraud level of a wallet is looked at by comparing previous transactions. Hapi emphasizes that they are not surveillance or invasive system. Rather, they see themselves as a system that functions as a cybersecurity layer. They only provide the data to DeFi users and operators to prevent hacking activities. Four different levels are used for this.

The binary risk categorization is a Hapi smart contract that indicates a value of ‘1’ for a risk address and a ‘0’ for a risk-free address.

What is the Bulwark System?

The Bulwark system is a reporting page (Report Page) and a DAO, a decentralized autonomous organization. This Bulwark system transmits data and reports about illegal activities to everyone connected to the Hapi protocol. The system shields illegal practices and prevents stolen crypto from ending up on an exchange at all. All affiliated DEXs and CEXs can now submit addresses via the Report Page, which are classified into one of four levels by the binary risk categorization. For example, stolen crypto can simply be denied access to a crypto exchange.

The management of the system will be expanded with various aspects, such as incident reports. It even mentions the government structure, which can seize the assets of individuals according to international laws. In this way, the network and the remuneration structure can continue to grow.

The structure for managing Hapi will then consist of a committee, a small circle for the decision-making. The HAC (HAPI Authority Committee) is part of this, consisting of members of the Hapi team and external trusted parties, who can implement proposals and decisions.

This is shown graphically below in the form of a Hapi smart contract. 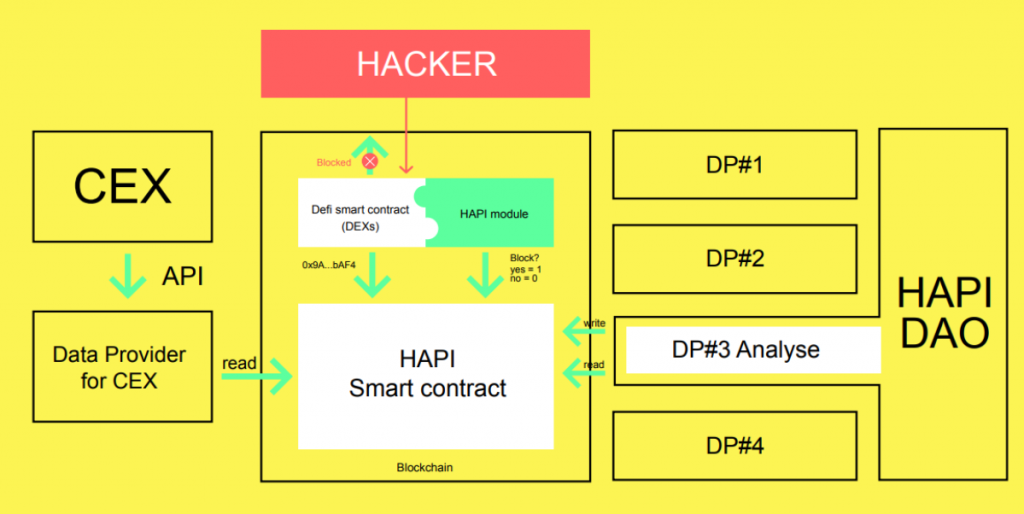 The Hapi Protocol as an oracle

The Hapi Protocol works like an oracle, with cross-chain functionality. First, we work with the best-known blockchains. However, Hapi has a somewhat different application than, for example, an oracle that provides off-chain price information on-chain. The Hapi oracle must above all be able to pass on information quickly.

Example of a hack on a CEX and the Hapi framework

First, here’s a graphical representation of a hack on a CEX and how the Hapi framework handles it. Below the image follows text and explanation. 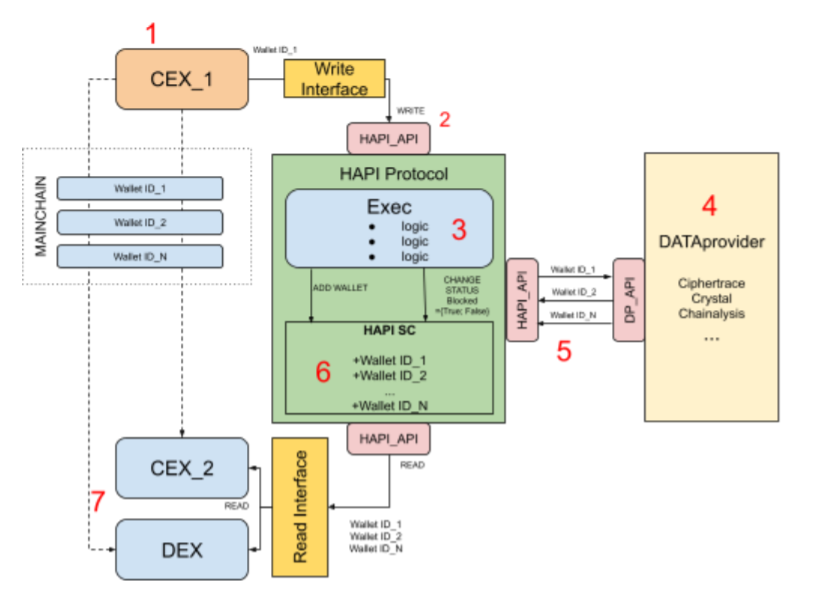 CEX 2 can now quickly block transactions coming from this wallet. Any DEX affiliated with Hapi can now also reject or block any connection that the hacker’s wallet wants to make.

A CEX can now use the Write Public Interface program to warn users that a hacking attempt is being made. The CEX can now freeze any funds that are being funneled and ask users not to use the CEX while the hack lasts. It also emphasizes the importance that the Hapi oracle must work quickly.

Who is on the team behind this project?

It’s hard to get information from the team. The founder of Hapi is a person who goes through life under the pseudonym of Dona Mara. On Medium he writes blogs about Hapi. The Hacken Foundation team is publicly known. This is the foundation that developed the idea behind the Hapi Protocol. Hapi is their first project.

Unfortunately, that’s all the information out there about the team at this point.

What is the HAPI token?

The HAPI token is an ERC20 token and is also available through the BSC as a BEP20.

The main use of the token is to circulate between the data providers and the security oracles. Other uses include management, oracle rewards, and staking.

The distribution of the tokens can be seen in the following image. The team gets 24%, which is a bit on the high side.

The tokens will be unlocked in 10 months, which is also a short time.

What is the price of the HAPI token?

If you want to invest in the HAPI token, a good start is to know its price. If you are already going to trade, you also want to make a profit. You can make a technical analysis to see what the best buy or sell moment is.

At  CoinMarketCap, he is outside the top 800 in place 859. This coin has a good prospect in my opinion because the project is still young and safety is in everyone’s interest. This still has growth potential. If you want to invest in this coin, it is important to do your own research, because I do not give financial advice.

Where can you buy the HAPI token?

The HAPI token is not yet for sale on Bitvavo  and  Binance . A few leading CEXs do offer this coin, such as Gate.io and KuCoin. There are also many liquidity pools on DEXs like Uniswap where you can find a HAPI pair.

What is the best way to store the HAPI token?

You can of course leave your HAPI token on the exchange where you bought the token. However, now you do not have access to your private keys. The private keys of exchange remain in the hands of the exchange itself. The danger of a hacked exchange is always there and then you have a chance that you will lose your coins. These wallets on an exchange are also called hot wallets.

Safety is in everyone’s interest, especially with a CEX or a DEX.  The Hapi Protocol has come up with a good solution to this problem, in a fairly simple way. If suspicious transactions take place, Hapi’s data files and fast oracles warn the connected CEXs and DEXs. These in turn can temporarily freeze the wallets from which money is being diverted, so that the hack is limited in size. The affiliated exchanges then receive the wallet address of the hacker, and they can deny him access. This way the hacker cannot convert his loot to fiat.

It is one of the first protocols to get started in this area, but I won’t be surprised if more solutions for this problem are put forward. At the moment, however, it is a project that has a lot of potentials. However, it is still young, so it will have to prove itself first. The future will show whether it has any chance of success. This will also be reflected on the HAPI token, and the future price will depend on the success of the protocol. However, if you still want to invest in the HAPI token, do your own research first, because I am not a financial advisor.