Borrowing and lending money has been a common occurrence for years. Or is that even centuries old? In addition, the crypto world is now paving a new path towards a future with a global economy. Since 2020, when DeFi came up, there were immediately several different protocols that especially the borrowing and lending of money, or in this case crypto, in a new jacket. DeFi, meanwhile, continues to grow, and after a sensational start in 2020, DeFi’s popularity will continue to rise in 2021. More and more new protocols are added, and some try to offer the same service in a different way. Benqi is then the first DeFi project on the Avalanche platform, and also offers borrowing, lending and earning interest. They do this with their Algorithmic Liquidity Market Protocol.

In this blog we are going to talk about Benqi and the associated QI token. I’m going to explain to you what exactly Benqi is and how it works. We are also going to investigate the team behind this project and take a look at the course. If you want to know where to buy QI, you’ve come to the right place.

Please note: keep in mind that the text below about ‘Benqi (QI)’ as well as the explanation thereof should in no way be taken as advice. The choice for whether and in what way you want to trade (crypto) and which choices you make in terms of investment is up to you and you alone. We are not financial advisors.

Here you can first watch a video showing how Benqi works.

Benqi is an Algorithmic Liquidity Market Protocol. You can borrow, lend or earn interest with your crypto . Benqi tries to solve the existing problems with DeFi , such as high gas costs and network congestion. Their platform has great scalability and is completely decentralized. They also want to build a bridge between DeFi and traditional finance.

Benqi is built on the Avalanche network and is part of the Avalanche Rush program. This is a program that has $180 million in grants to be outsourced through mining grants and airdrop programs. It is intended to allow DeFi apps to participate and run on the Avalanche platform. In turn, these apps provide new and existing DeFi merchants with an easy-to-use, fast and cost-effective application. In this way Benqi democratizes access to DeFi products. They do this in three ways.

You can certainly get passive income by lending your crypto. This is in contrast if you ‘just’ leave it on a fair or stored or hodl’ed in some other way. Money borrowers can borrow with extremely high collateral.

At the end of August 2021, the launch of Benqi on Avalanche took place. Two days after launch, on August 21, $500 million had already been invested. Of this, $200 million was secured within 24 hours. After a week, Benqi already had $1 billion TVL.This is quite a remarkable fact, as it took Aave , the leading Ethereum -built lending protocol, 8 months to hit the 1 billion mark. Total locked value is the total of crypto locked within a platform in the liquidity pools . 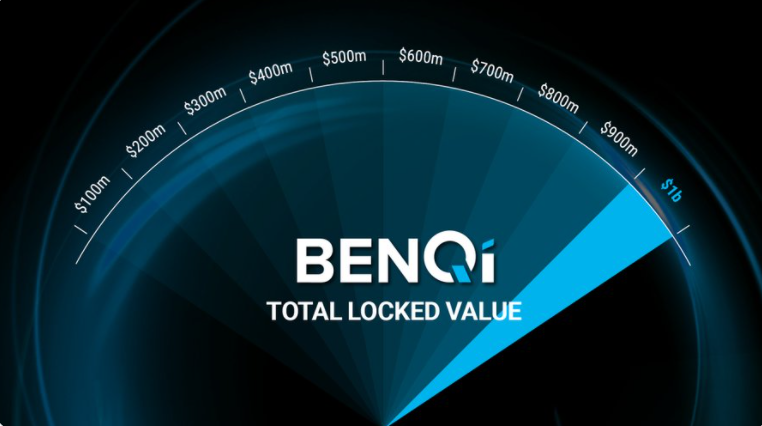 In that regard, DeFi is doing very well anyway. By mid-October 2021, total TVL across all DeFi protocols rose above $200 billion in total locked value.

Besides the fact that DeFi is doing well, the Avalanche Rush program probably also contributed to Benqi’s explosive TVL. The joint liquidity mining program with Avalanche will free up $3 million of AVAX (the Avalanche token) to be shared between Benqi users.

If you borrow or lend crypto through Benqi with the following crypto coins, you can get an AVAX reward: AVAX, ETH, LINK , WBTC, USDT and DAI .

How does Benqi work?

Benqi actually works in a simple way. You look at which cryptocurrencies are used on the protocol, and then add liquidity for the coin(s) you choose . Depending on the demand for loans for the currency you have chosen and that you have deposited in the protocol, you will receive interest. So there is a lot of demand, do you also get a lot of interest on your deposited crypto. However, if there is less demand, it can take a while before someone starts borrowing something. It is also possible to use crypto coins that you have deposited as collateral. This gives you the opportunity to borrow other crypto coins yourself. The interest from lending then compensates for the interest you pay to borrow yourself.

As the platform grows, new liquidity pools will also be opened for new tokens.In the beginning, Benqi’s team will determine which pools will be added. Later, when management changes to a DAO, new pools will be nominated and approved by the DAO community. The QI governance or management token is used for this.

How is crypto stored in Benqi?

The deposited crypto funds are managed by smart contracts . Users who have deposited or borrowed crypto will receive tokenized tokens that give interest, the QiTokens. You can use this to remove crypto from the pools whenever you want. These QiTokens can simply be transferred and traded on the Avalanche platform. Exactly the same way you can do with all other crypto on Avalanche.

This QiToken reflects the amount of crypto you have deposited in the Benqi protocol. In this way, those who have deposited crypto in the protocol will receive interest. This amount is always adjusted by an algorithm, based on the market value . All assets are part of their own supply and demand market, with an associated APY (Annual Percentage Yield) that also changes over time.

Who is on Benqi’s team?

There are seven people behind the idea and project of Benqi. Time to check it out.

An extensive and diverse team that seems to have what it takes to manage this project.

What is the QI token?

The QI token is an ERC20 token and it is the management token of the Benqi platform. It is also Benqi’s native token that powers the entire platform. You need the QI token to vote on protocol-changing proposals. These are the so-called BENQI Improvement Proposals (BIPs). Once the platform becomes a DAO, token holders will be able to submit and vote on proposals. In this way they can help determine the future direction of the protocol.

During the two private sales of QI tokens, $6 million was raised. A public sale on the Pangolin DEX also sold out quickly.

The image below shows the distribution of the QI token well. 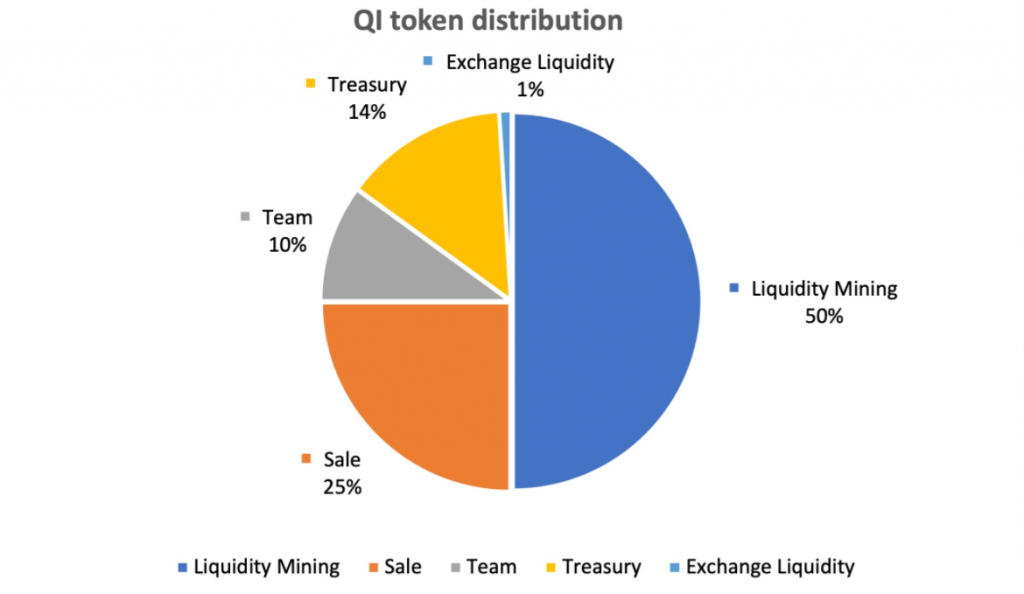 We see with this token that the team takes 10%, which is a good sign. They are interested in guiding the protocol further. If a team reserves a high percentage of the tokens for themselves, it is often a clear sign that they want to walk away with the proceeds from the ICO or IDO. A so-called back pull. It certainly doesn’t look like that with this project and team. In addition, the 10% for the team will be unlocked in four years, with a percentage per quarter. Only after the first year after the public sale will this unlock for the team begin. Clear signs that this team is serious about this project.

The issuance of the tokens is also spread over several years. The following image shows this clearly. 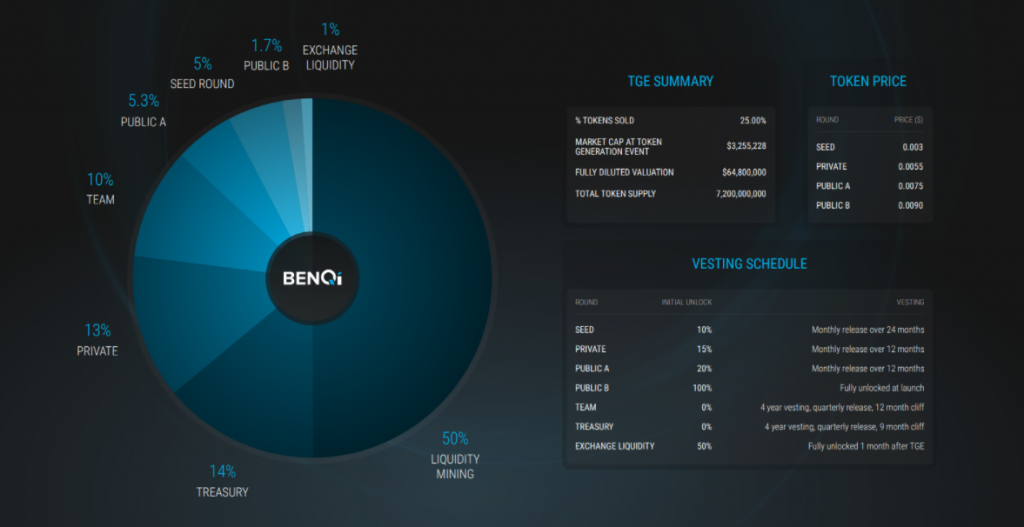 What is the price of the QI token?

If you want to invest in the QI token, a good start is to know what the price is. If you are already going to trade, you also want to make a profit. You can make a technical analysis to see what the best buy or sell moment is.

The QI token entered the listing of CoinMarketCap on August 19, 2021, trading at zero US dollars. Almost immediately after the introduction, the preliminary ATH was already reached on August 24, 2021 with a price of $ 0.3945. Since then, the price has also gradually fallen, with occasional peaks. At the time of writing, in mid-October 2021, the price appears to have reached a tentative low of USD 0.1235. The price also seems to be picking up a bit at the moment. The current low was reached on September 30, 2021, with a price of $0.08642.

At  CoinMarketCap  , it is just outside the top 600 in place 624. I think this coin has a good prospect, especially if Bitcoin continues to rise in 2021. I think it could have a good price development. If you want to invest in this coin, it is important to do your own research.

Where can you buy the QI token?

The QI token is not for sale on Bitvavo or Binance at the moment. A few leading CEXs do offer this coin, such as Gate.io and KuCoin . There are also a few liquidity pools on DEXs like Pangolin and TraderJoe where you can find a QI pair.

What is the best way to store the QI token?

You can of course leave your QI token on the exchange where you bought the token. However, now you do not have access to your private keys. The private keys of an exchange remain in the hands of the exchange itself. The danger of a hacked exchange is always there and then you have a chance that you will lose your coins. These wallets on an exchange are also called hot wallets.

The roadmap currently looks relatively simple. A loan and loan protocol is now live. Then a Liquid Staking and a Future DeFi protocol are added. 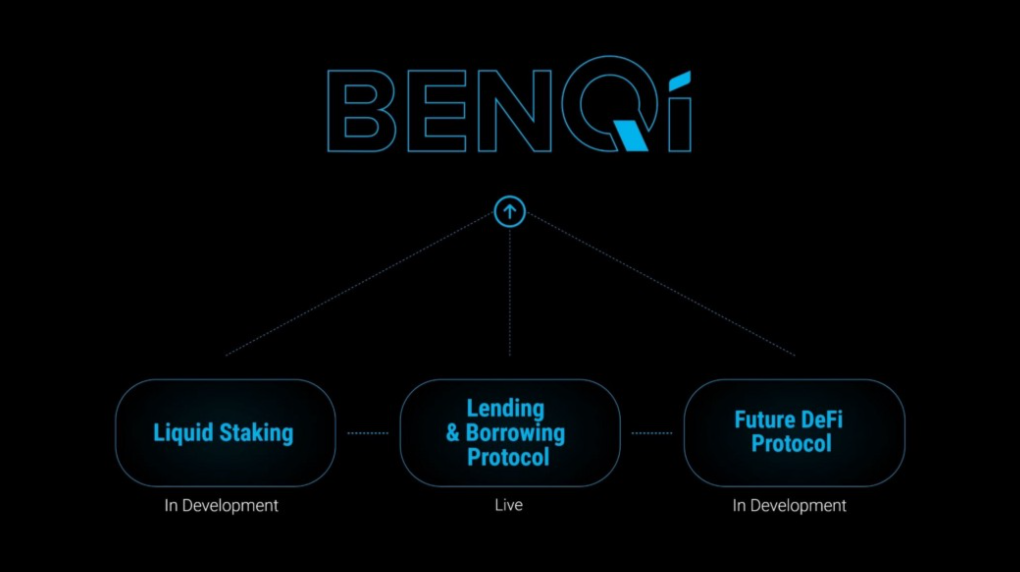 DeFi is becoming more and more popular, but the masses still haven’t discovered it. Benqi, however, is a protocol that brings this one small step closer.

Benqi is also capable of taking a big bite out of the DeFi. They have achieved good results in a short time. The total locked value was already at $1 billion after a week. This is also a sign of how fast the lending/lending market on DeFi is growing. Most of the competition is on the Ethereum blockchain and has to do with high gas costs there. As a result, any interest profit is immediately consumed by the gas costs. Benqi doesn’t have that problem.

All protocols running on the BSC have other drawbacks. Avalanche is fully decentralized and has over 900 validator nodes. BSC has 21 nodes and they are more or less owned by one entity.

You never really know one hundred percent in the crypto world, but it seems that Benqi could go far. This will later also be reflected in the price of the QI token. These are of course no guarantees, but keep that in mind. However, if you want to invest in the QI token, do your own research first.

If you have any questions about Benqi, let us know on our Crypto Buying Facebook group. See you there!