Let’s start with the most important thing when we talk about the term ‘Bitcoin halving’: No, Bitcoin is not going to be worth half. In this article  you can learn  in detail what Bitcoin halving is and what important dates are for Bitcoin in the future.

Bitcoin has never been as ‘hot’ as it was in December 2020. At least when we talk about Bitcoin’s price and media attention. Never before has the price of Bitcoin been as high as it was this month. And does that have anything to do with today’s topic? We certainly don’t rule that out!

Before we jump directly into the sentiment of the Bitcoin halving, let’s take a look at how fiat money works. By fiat money we mean ‘normal’ money. Well-known examples of fiat money are the Euro and the US Dollar. The way money is created has changed a lot in recent years, as you could see in the video.

The most important change took place in 1971. In 1971 the gold standard was abolished by President Nixon. Until that year, this duly ensured that a certain amount of gold was always linked to the amount of money. In this way, new American Dollars could only be printed if another gold mine had been turned upside down. See below where President Nixon abolished the gold standard.

Now you may wonder what the added value of this piece of history is. It’s actually very simple. From 1971 there is therefore no longer a direct link between the amount of money in the world and any form of collateral. The consequence? A government can print a few billion dollars or euros if they need to to give an economy a healthy boost.

The flip side of money printing is that it can lead to heavy inflation and it is precisely this risk that more and more people are starting to lose their trust in traditional banks and traditional currencies such as the US Dollar and the Euro. Unlike the fiat, Bitcoin is where inflation grows at only 1.80% annually at the time of writing until the last Bitcoin is mined in 2140, see below the graph of the so-called “Bitcoin Monetary Inflation”. With every Bitcoin halving, inflation halves annually. 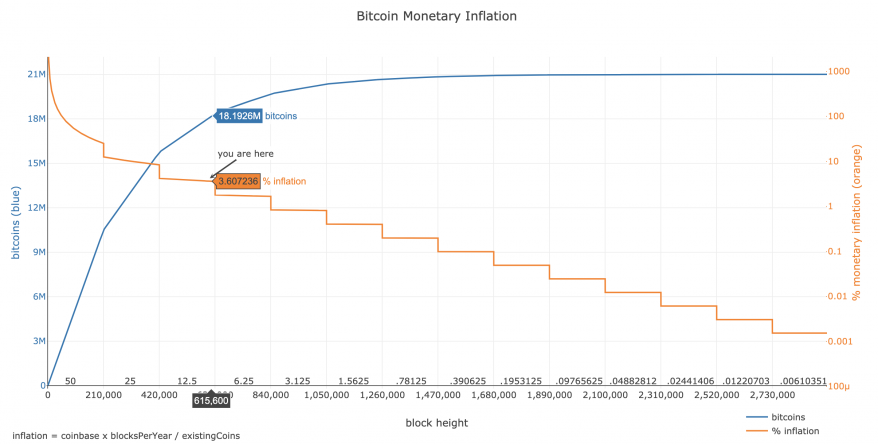 Of course, we don’t have to be hypocritical about the fact that there has been no collateral against fiat money for a while. Because very honest? That is not the case with Bitcoin. Just like with fiat money, the price of Bitcoin is fully based on emotion and trust. As with any currency, stock price, index fund and other types of investments.

The maximum amount of Bitcoin

The magic number for Bitcoin is 21,000,000, or 21 million Bitcoin. That may sound like a lot, maybe not. At its current market value, 21 million Bitcoins would represent approximately $420 billion (or $420 billion). There are days when you and I don’t have it in our bank accounts, but when you compare it to the global economy, 420 billion is still “peanuts.”

Only if you look at the number of euros, there is currently already ten times that in circulation in coins and banknotes. It is therefore reasonably safe to say that Bitcoin will always remain smaller than the global economy for now. Until the price of Bitcoin takes a few big jumps again.

What is the Bitcoin halving? 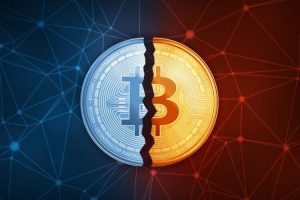 Here we go. As you may know, Bitcoin comes into circulation by performing complex activities with computers. These activities are also known as ‘ mining ‘ Bitcoin. When a miner successfully mines a block, he or she receives a fee for it.

Originally (earlier) a miner got 50 Bitcoin for every time he managed to successfully mine a block. Before you immediately get dollar signs in your eyes, just a little side note. In the old days when a miner got 50 Bitcoin per block, the price was less than 20,000 dollars. So not every miner is a millionaire by definition.

The Bitcoin halving is predetermined and determines the speed at which the 21 million Bitcoin will come into circulation. If you assume that Bitcoin only started in 2009 and 11 years later has already put more than 85% of all Bitcoin in circulation, you probably think that we are almost there.

Error! It is precisely because of the Bitcoin halving phenomenon that it will take another 120 years before the very last Bitcoin enters circulation. Every Bitcoin halving, the block reward, i.e. the amount of Bitcoin that the miner receives for his earnings, is halved.

At the same time, you don’t have to find miners very pathetic. With a well over $120,000 worth of Bitcoin as a block reward, they don’t have much to complain about.

In short, a Bitcoin halving takes place approximately every 4 years. As more and more Bitcoin halvings take place, the block rewards will get smaller and smaller. As you know by now, this does not necessarily mean that the actual compensation (converted into Dollars or euros) is lower than before the halving, but it does mean that the number of Bitcoin that are awarded as compensation is further halved with each halving.

Anyone who is a bit mathematically inclined will understand that when you fall from 50 back to 25 and from 25 back to 12.5, then to 6.25, 3.125, et cetera et cetera, the pace at which the restrictions are implemented. This means that the rate at which new Bitcoins come into circulation is halved with each halving and therefore goes slower and slower.

As mentioned, it will take another 120 years before the very last Bitcoin is in circulation. We can only guess what the world will look like by then. But back to the important upcoming dates for Bitcoin halving.

The sixth halving will take place sometime in 2028 and will halve the block reward again to 1.5625. This pattern will then repeat itself every four years. After the 10th halving, the reward per block is only 0.09765625 Bitcoins.

What is the effect of a Bitcoin halving on the price?

You can say that there is no direct relationship between halving the compensation that miners receive for mining a block and the price that is linked to Bitcoin. It can of course be a complete coincidence that the price shows strange jumps shortly after a Bitcoin halving. But is it all so coincidental?

In a strange year when the global economy took a huge blow due to the pandemic, the fourth Bitcoin halving was on the line. May 12, 2020. 2020 kicked off with a Bitcoin price of around $9,000 that then collapsed along with the rest of the global economy and then slowly bounced back. Whether there is a direct connection with the halving in May 2020 or not can of course never be proven, but within six months after that, the price managed to tap an All-Time High (ATH) of $20,000.

Of course, it could be just a coincidence, it could also be that it isn’t. One way or another, the Bitcoin halving always seems to have a strong positive effect on the Bitcoin price. While the price always picks up nicely in the year itself, the real fireworks and impact of a Bitcoin halving only seem to take place after a year.

In that regard, we can only guess at the impact the last Bitcoin halving will have on 2021. Avid Bitcoin followers are happily speculating and quotes as high as $100,000 per Bitcoin. Nobody is surprised by that, because an increase of 500% in a year is not something that is foreign to Bitcoin.

Whether it’s a coincidence or not, every Bitcoin halving so far has been accompanied by an insane impact on the crypto’s price. Is Bitcoin’s Resurgence in 2020 a Significant Picture for a Shockingly Strong 2021? And will Bitcoin breakthrough that $20,000 or maybe $50,000 barrier?

Even after 2021, we look ahead to 2024, 2028, 2032 and every 4 years that follow. Does Bitcoin keep up the tradition that fireworks are to be expected every 4 years? We will of course keep an eye on the situation with great interest! Do you like numbers and counters and would you like to keep an eye on the upcoming Bitcoin halving yourself? Via the countdown function of Binance  you can follow the countdown to the upcoming Bitcoin halving accurately to the second. Keep in mind that the pace at which new blocks are delivered determines the final date on which the next Bitcoin halving becomes a fact. The timer is therefore mainly an indication based on historical hash rates of miners.